December 31, 2015
in-focus-panamaComments Off on Touring The Pacific Coast Beaches Near Panama City

Before I share some of what Dusty gleaned on his fact-finding mission, I want to share a little bit about what Panamanians mean when they say they are going to the “beach” for the weekend.

When people in the States and Canada say they are going to the beach for a weekend or longer, they usually mean just that—they are going to a home or condo someplace where there will be sand and surf right outside the door. They will spend the bulk of their time there lolling under an umbrella sipping cold drinks and watching the water lap at the shoreline or taking long walks or swimming or fishing or whatever. Beachy things.

For many Panamanians (especially those with weekend homes in the City Beaches), going to the “beach” more often refers to a state of mind rather than a physical location. It’s not inconceivable that when someone from the capital goes to the beach for the weekend that they will never set foot in the sand or even see the water. Their home may be miles from the ocean, but they still call it a “beach house.” That beach house is merely an escape hatch that happens to be somewhere near the water. It’s a place where they can get away from the claustrophobia and chaos of the city, where they can lay in a hammock on the veranda or barbeque with friends and family or simply sleep all day. Sand and surf are optional. 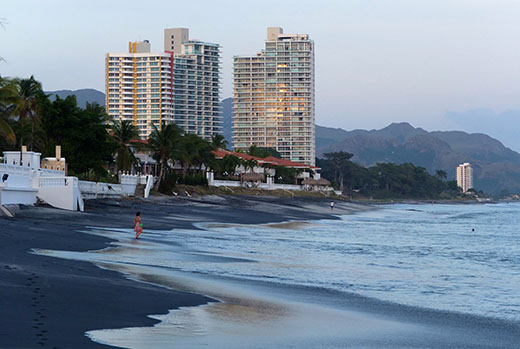 It’s something to keep in mind if you are ever invited to someone’s beach place for the weekend. Don’t automatically assume that surfboards and sunscreen are part of the weekend’s accoutrements. You may not get wet at all, in fact. Best to ask what’s in store before heading out.

With that out of the way, here are some of what I consider the most interesting takeaways from Dusty’s report on the City Beaches in the December issue of Panama Letter. 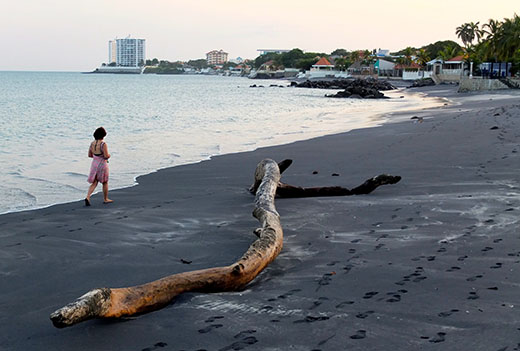 A nice, long walk along the beach

There’s plenty more of interest in Dusty’s full report, including pictures of all 27 of the named beaches along the Gold Coast and a map of exactly where each sits, detailed cost-of-living data for the area, and a sampling of some of the properties for sale or rent both on and off the beaches. You can subscribe to Panama Letter and receive your copy of Dusty’s detailed report here.

A day spent golfing at the Coronado Golf and Beach Resort

If Dusty’s details have piqued your interest about the City Beaches, why not come down and see them for yourself? As I mentioned, we are all gearing up for our first Access Panama Property Tour and the City Beaches is front and center on the itinerary. We will take in Coronado, Gorgona, and a handful of other developments in the area and give you a firsthand look at what many people are calling one of the most exciting current real estate opportunities in the Americas. Join us on Jan. 29–Feb. 1. But don’t delay—we’re getting close to capacity already. More information is here.