December 24, 2015
in-focus-panamaComments Off on New Year’s Eve In Panama

Depending on your demeanor, New Year’s Eve celebrations in Panama are either somewhat loathsome or downright lovable. I tend to fall into the latter category, despite the very real perils of the holiday for relative newbies to Panama like myself.

Case in point: Las Tablas, Dec. 31, 2014. It was our first New Year’s Eve in Panama and we wanted to make it a memorable one. We hoped for a show, and we were not disappointed. After a day at the beach and a nice dinner, we wandered into the main town square a few minutes before midnight, parked ourselves on a park bench and waited for a countdown.

Where did I think I was? Times Square? The countdown never came. But just before midnight, a couple of elaborate floats drifted into view blaring salsa music and bearing lovely young ladies in skimpy outfits waving enthusiastically and swinging their hips to the beat. Before we even had a chance to admire their skill and rhythm, men on both sides of us were lighting bricks of firecrackers the size of bread loaves and tossing them to the ground all around us. Others had rockets, lighting them as fast as they could. Within minutes, the square looked like something out of a firefight from the film Apocalypse Now. And this went on for an hour… 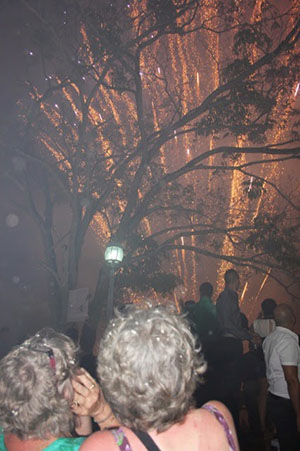 The fireworks in Las Tablas 2014

Even more astounding was that people—mainly teens and young men—were running toward this mayhem instead of away from it. They were darting in and out of the chaos with glee, seemingly oblivious to the burning embers floating everywhere and smoke so thick that some of the young ladies on the floats were holding handkerchiefs over their face. Once we got over the shock of the initial assault on our senses, it was all good fun. The experience left us all with a slight ringing in our ears that lasted for hours afterward, but it was good fun nonetheless.

Fireworks on New Year’s Eve is not an exclusively Panamanian phenomenon (one encounters it almost everywhere in Latin America), but there is another tradition they have here which seems to be unique. As I have been driving around the Veraguas province this week, I have noticed more and more life-size effigies popping up in front of people’s houses. They are scarecrow-looking things, often with the same straw hats worn by campesinos and tattered old blue jeans and shirts stuffed with leaves or grass. Their heads are often of papier–mâché and hand painted. Sometimes, they crudely resemble public figures or celebrities. 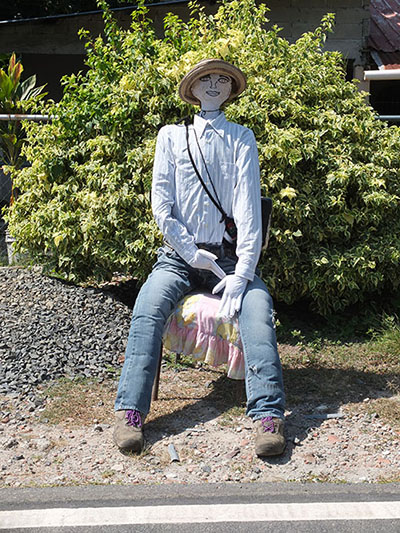 These dummies are called muñecos, and they begin to appear in rural areas of western Panama in late December. I haven’t been able to figure out how and why the tradition evolved (if any readers have any clues, please let me know), but the practice is something akin to good-luck rituals like kissing your mate at midnight or eating black-eyed peas early on New Year’s Day that we followed back in Texas.

To bury any bad memories from the previous year, rural Panamanians make a muñeco that reminds them of those memories and then proceed to burn the doll at the strike of midnight (more mischievous folks stuff them full of fireworks and blow them to smithereens before burning the remains) in order to start the new year off on the right foot.

The same public figures ridiculed by these muñecos seem to take it all in good stride. I’ve heard tell that local politicians in the Chame district even give out awards to the best muñecos each year and as a result the tradition there has become something of an arms race. Reports in the Panamanian press that I was able to suss out online say that some people there spend as much as US$500 on their muñeco in a quest to win the coveted annual prize. There are even people who hire ringers to make professional-grade faces for their muñecos that are often a pretty good representation of the person being roasted. 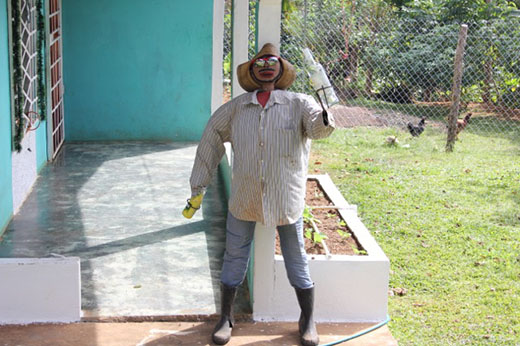 Since I spend a lot of time driving and tend to daydream a little while I am on the road, I got thinking about which public figures I wouldn’t mind seeing the hind end of as 2015 comes to a close. Thankfully, I am not as exposed to American pop culture as I used to be so my frame of reference is perhaps not as current as others’, but I can think of a certain family of Armenian descent in Los Angeles that I could do without hearing of in the coming year. Another whose backside I would gladly give the boot to is a New York real estate mogul with delusions of grandeur and narcissistic personality disorder whose muñeco I would happily torch on New Year’s Eve. If you need another clue… the muñeco would have a really bad comb over…

Anyone out there want to nominate their own muñeco for the “glad to see go” award? Post your suggestions on our Facebook page and we’ll share them here next week in time for the holiday.

P.S. The muñecos of Chame will be embers by then, but we still have spots left on our inaugural Access Panama City and Beaches tour in late January. Come see for yourself why everyone is talking about Panama. We’ll take you on an exclusive tour of golf, marina, and beach resorts in Panama City and the Pacific beaches west of the city, and pass through the Chame district on the way. More information and a sign-up sheet is on our website.