June 30, 2016
in-focus-panamaComments Off on Celebrations, Customs, And Holidays In Chitre, Panama

Come Celebrate With Us

It seems almost impossible to talk about Panama without bringing up a holiday. People joke that almost every day in this tropical country is one. If you are here on business, or just need to urgently accomplish something, have patience, it will certainly feel like businesses are out for holidays more than they are in for workdays.

Holidays here are based on religion, traditions, and national patriotic pride. There are many local and regional holidays throughout the country, which differ from the many national holidays, something common in every country around the world. (Timeanddate.com lists 152 dates with holidays in the United States, for example.)

This year Friday, June 24, was a holiday that most people were not aware of. It’s not a national holiday but a local religious holiday, the celebration of San Juan Bautista (Saint John the Baptist). This Patron Saint’s day is celebrated in Chiriquí in the towns of San Félix, Alanje, Boquerón, Dolega, and Bugaba. Santo Domingo in Los Santos is another town that celebrates this Saint, as is Chitré, Herrera. 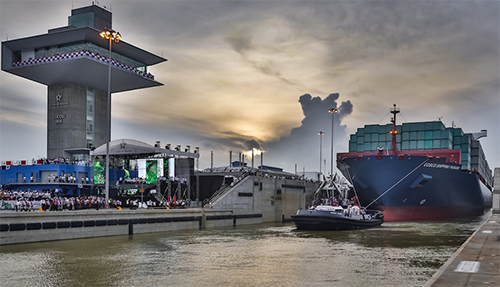 In the news: The expansion of the Panama Canal

Every town has a Patron Saint, but not every town has a Saint’s Day event. Every year these celebrations become smaller and fewer, but not in Chitré. Most towns usually have a small parade or hold a modest fiesta to celebrate their Patron Saint… but not Chitré, they celebrate in a big way.

In Chitré, El Día de San Juan Bautista festivities are second only to those of carnaval. While carnaval is a week-long wild, raucous event, the celebration of San Juan Bautista can span two weeks and is most definitely more family friendly.

San Juan Bautista festivities are more community-involved events. Yes, there is alcohol (this is Panama, you have to have ron, seco, and cervezas), plenty of food, and lots of music. Thousands of people come to celebrate, but the party atmosphere is calmer, friendlier, and, in general, more comfortable.

The celebration of San Juan Bautista highlights local folkloric dances, specifically, the zaracundé dancers. These dances are strongly influenced by the traditional African dance. Their costumes are made with dried leaves, much like a hula skirt, along with a headdress and necklace.

Then there are the parrampanes (mocking performers), more commonly known as mojiganga in Chitré. Politicians, famous people, and anyone else is subject to their farce, masquerade, and clowning around. Nothing is sacred, and no one is off limits.

Horseback riding, ox carts, devil dancers, floats, music, dancing skeletons, bullfights (no killing of the bull here), and parades are among many other fun activities and things-to-see during the festival.

Chitreanos and visitors also participate in several religious ceremonies that highlight the celebration of San Juan Bautista… after all, this is a religious celebration.

The streets of Chitré are adorned with red flags, a sign that the people have been partying and celebrating since the beginning days of June. Preparations are always well underway several weeks prior to the festivities… Weeks before the festival, stages have been set up, viewing platforms constructed, metal towers to support the sound and lighting systems are put in place, and groups begin to claim their spots.

Almost two weeks prior, the program begins with the ringing of the bell, firing of cannons, and the announcement of the Patron Saint Juan Bautista. The Herrera Museum has an exhibition of devil’s masks and parrampanes and the Gilberto “Falco” Villaláz Competition Municipal awards are held. Union Park is the location for the “Romualdo Sánchez Pérez” Dirty Devils (Diablicos Sucios) Competition.

Following tradition, the Patron Saint is brought from Puerto El Agallito, accompanied by dancers and folklore demonstrations, to the Cathedral in Chitré.

Another long-standing tradition is the Tuna de los Caballitos de Palo (stick-horse parade). This parade is organized by the local educational institutions and is held on the eve of El Día de San Juan Bautista. The finale is a grand fireworks display at 8:30 p.m.

Some things you should take note of during all Panamanian holidays: When do businesses close? Which businesses stay open? What are their hours? Which streets are closed and when do they set up the blockades/barriers?

The only one way to know for sure—go there. Many businesses will post a notice giving their hours, but not all of them do this. In the case of El Día de San Juan Bautista, the closer the business is to the cathedral, the more likely they are to be closed.

Basically, in regards to barricaded streets, you won’t find information notices anywhere on what is to be closed. You will not know what streets are blocked off until you reach the barricade.

If you want to live full time, part time, or just be a visitor here in Panama, just remember to bring your good-times attitude….

Cue the song “Celebration” by Kool & the Gang…

“There’s a party goin’ on right here
A celebration to last throughout the years
So bring your good times, and your laughter too
We gonna celebrate your party with you…”