Common Spanglish Words In Panama You Should Know

April 21, 2016
in-focus-panamaComments Off on Common Spanglish Words In Panama You Should Know

Panama 101: A Short Primer On Spanglish In The Gateway Of The Americas

Every couple of weeks on my way to the capital from our temporary home on the Azuero Peninsula, I pass through a district named Arraijan that always makes me pause. It’s just west of Panama City, on the other side of the canal, and the third most populous district in the country. The massive Panama Pacifico development is there, as are dozens of other smaller municipalities and hamlets.

What gives me pause is the name. Arraijan. Never have I heard that word in Spanish elsewhere. Anywhere.

I began asking around about its origins, and the most common explanation from people in Panama was that it was a bastardization of an English phrase. The story goes something like this: Back in the Gold Rush days, when Panama was one of the inter-oceanic transit points for miners making their way from the East Coast of the United States to the West Coast, the last village one passed between Colón and Panama City was “on the right hand side” of the road. The story seems plausible. Especially given that Arraijan didn’t exist as a formal district until 1855. 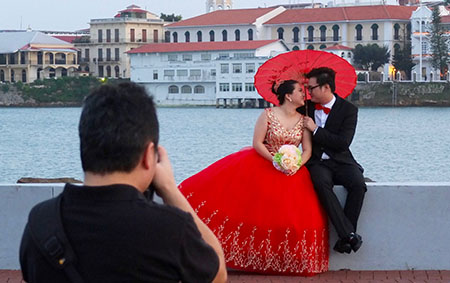 A Panamanian guy who found his “guial”

Alas, despite it being repeated by almost everyone you speak to around here, the story is probably not true. Columnist Marcelino Rodriguez, writing in La Estrella de Panama a couple years ago on the anniversary of Arraijan’s foundation, says there was a canton named Arraijan in that part of Panama as far back as the 1840s, and that the name had been used in relation to the area going back much further.

Another theory about the origins of the name is that there was a native cacique, or Indian chief, that lived in the area in pre-colonial times that went by the name Arrayan and it took his name. Rodriguez doesn’t buy that one either, though, as no one has been able to find any mention of such a chief in all the records of the Spanish crown. And the Spanish recorded everything.

The most likely explanation, according to Rodriguez, is that there is a species of myrtle bush common in the district that goes by the Spanish name of arrayanes. It’s not quite as interesting a story as the “right-hand” theory but far more believable. So there it is. The next time someone tells you that Arraijan has its origins in English, impress them with your knowledge of local lore and dispel them of this myth.

That said, there are still plenty of examples of Panamanians adopting English phrases for their own. Anyone who spends any time in the country is bound to do a double take every now and then when they hear what sounds like an English word tossed around casually in a Spanish conversation. Popularly known as “Spanglish” phrases, they are common to many parts of Spanish-speaking America and each country or region has their own examples (though Panama seems to have more than most because of the country’s historical ties to the United States). Here are some of my favorites:

Chilin (CHIL-in): A version of “chilling.” Chiliar is the verb. It means exactly the same thing as it does in some English-speaking circles—to “hang out.” Vamos a chiliar en la playa. Let’s go chill at the beach. The phrase is considered slightly vulgar, so use it sparingly and definitely not around your elderly Panamanian neighbors. 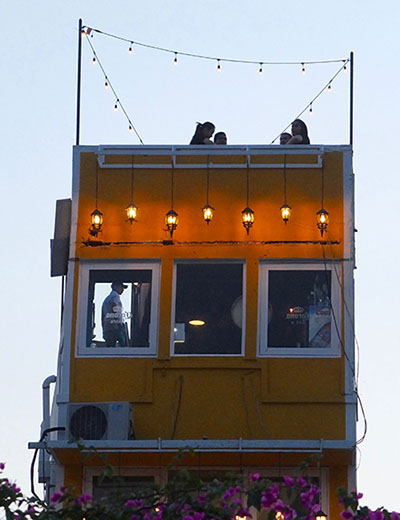 “Chilin” on a rooftop bar in Casco Viejo

Tripear (trip-eh-AHR): Literally “tripping,” but in Spanish it has nothing to do with drugs or confusion. It means to enjoy or have a good time.

Guachiman (wa-chi-MAN): A security guard or “watchman.” You know… those guys sleeping outside the car dealers in the middle of the night.

Guial (GUI-al): A girl, or gal. Usually used in conjunction with some sort of reference to her attractiveness or desirability. “Esa guial es bien guapa.” “That girl is really hot.”

Chance (CHAN-say): Exactly what it looks like, a “chance” or “opportunity.”

Focop (FOCK-up): Exactly what is sounds like. A version of the English F-word meaning really messed up.

Mulear (MOO-lay-ar): To walk a long distance, from the English word mule. Similar to the English colloquialism “hoof it.” “El diablo se daño y tuvo que mulear hasta mi casa.” “The bus broke down and I had to hoof it all the way to my house.”

I am sure there are plenty more that I have left out. Know of any interesting ones? Drop in over at our Facebook page and share them with the rest of us.