I thought my IFP readers would enjoy Kathleen’s article about the origins of Los Islotes. I was one of the people gathered around the rancho’s wooden bar with cocktail in hand admiring the view that is Los Islotes. I am excited to be a like-minded pioneer making my way to this part of the world. Five years ago with machete and GPS in hand we secured our spot in this pristine outpost. I must agree with Kathleen that the stretch of Pacific at Los Islotes is about as good as it gets.

“When did you first begin spending time here?” our friend Muriel asked as we sat down to lunch Saturday afternoon.

A dozen of us were gathered beneath the red clay-tiled roof of the small rancho atop the hill with views of the crashing Pacific Ocean beyond. It was a cloudless blue-sky day but windy. The surf hitting the beach below us was frothy.

“We’ve been spending time here,” I told Muriel, “since before there was any here here…

“When we stumbled upon this coast nine years ago,” I explained, “nobody was paying it any attention. Panamanians didn’t even know it. We’d tell local friends in Panama City that we’d spent the weekend in Morillo, on the western coast of the Azuero Peninsula, and they’d respond to ask, ‘Where’s Morillo?’

“Our first visits out here,” I carried on nostalgically for Muriel, “Robby’s Cabañas at Torio, the next village along the coast, were the only game in town. Maybe a year later, Ludvig opened his place across the road from Robby. I was the first guest to stay in the first cabana made available for rental at Ludvig’s.

“Ludvig realized at the last minute that he didn’t have sheets for the bed and had to send someone to Santiago to buy some for me,” I remembered.

When we arrived on the scene in this coastal frontier, the road down the coast from Santiago had just been paved for the first time. No one traveled it. We’d pass ranchers on horseback herding their stock and the occasional Peace Corps volunteer or backpacker on foot.

Back in those days, our fellow guests at Robby’s and Ludvig’s fit Jimmy Buffet’s descriptions of expats you meet in this part of the world. They went by first names only and often not their own first names. They didn’t ask you questions about where you’d come from or how you’d found your way to this terra incognita… and you returned the favor. 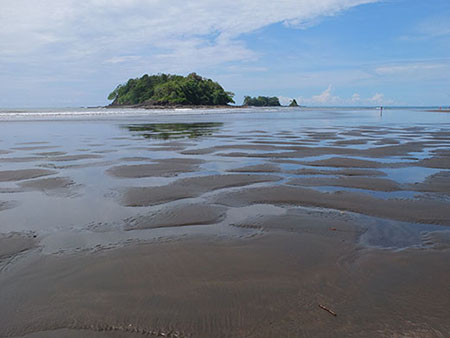 Lief and I came to Azuero’s western coast in search of a big piece of coastal property. We had dreams of developing a private beachfront community and were bowled over by the caliber of the beachfront property to be had along this Pacific sunset coast. When we found Los Islotes, the piece of land we eventually bought, we imagined a 10-year timeline for development. We purchased Los Islotes in 2008, maybe the worst year in our lifetimes to launch such an undertaking. 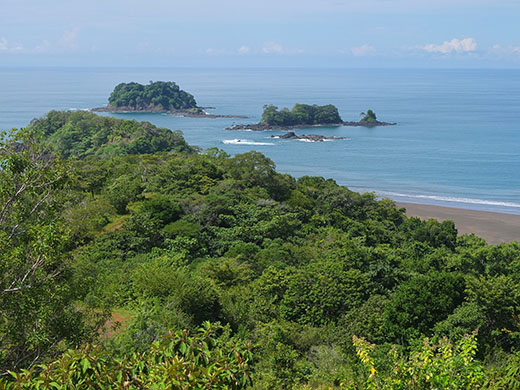 Islands in the stream off the coast at Los Islotes

Fortunately, we were still young and enthusiastic enough to overlook the timing challenges. What we were unprepared for were the on-the-ground obstacles. By this time, I’d been knocking around Banana Republic markets for nearly 20 years. Still, scouting and reporting on emerging-market real estate developments is not the same as investing in an emerging-market real estate development of your own.

Today, nearly a decade later, Lief and I are veteran pioneers. We’ve watched as the area around Morillo and Torio has grown into a lively community. Robby’s and Ludvig’s cabanas are still available for nightly rental. In addition, now you can choose from among a half-dozen other hostels and surf camps, including one, El Sol, with a private suite that goes for US$600 a night. It’s finished with European furniture, imported fixtures, and original art.

El Sol also features a restaurant where we enjoyed the best dinner we’ve had to date in this part of Panama. Dining options historically on this Azuero coast have been limited to fish or chicken with your beans and rice. The meal of foie gras and prime beef accompanied by sparkling and red wine that we enjoyed at El Sol could have been served unashamedly in France.

Accommodation and dining options on Azuero’s western coast around Morillo and Torio are moving up-market. More relevant to the future of this until-now wholly undiscovered stretch of Panamanian coastline is that, today, finally, people have heard of it.

“How was your weekend?” I asked our Conference Director, Valentine, Monday afternoon when we sat down together for a meeting.

“It was great,” she replied enthusiastically. “My boyfriend and I went to this beach called Morillo. It’s so beautiful there…”

It’s also gaining a reputation as a top surf beach. 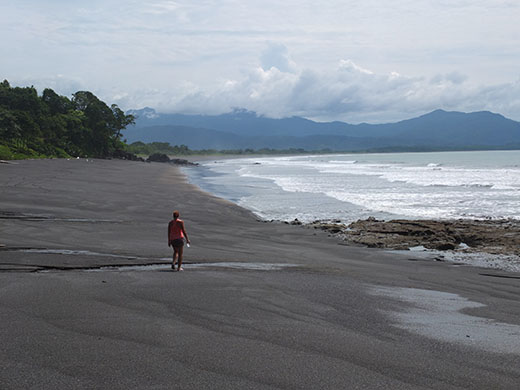 When our son Jackson mentioned a couple of weeks ago that his friend Valerian, an avid surfer, was going surfing at Morillo, Lief and I thought we’d misunderstood. Panama boasts many great surf spots, some much nearer to Panama City. Was he sure that Valerian was traveling all the way out to Morillo to surf, we asked Jackson.

“Yeah, he goes there all the time,” Jackson replied.

It was that revelation that led to our Saturday afternoon barbecue this past weekend. Our friend Muriel is Valerian’s mother. When we found out that they travel regularly to Morillo beach, we arranged to meet them out there and invited them over to Los Islotes for lunch.

It’s nearly 10 years since Lief and I first set eyes on the western coast of Panama’s Azuero Peninsula. We’ve enjoyed turning points since… when we closed on the purchase of Los Islotes… when we received our full development permits… when we cut in the first roads… when we opened our small on-site office complete with phone and Internet… when we broke ground on the Founder’s Lodge…

Since those very early days, though, when the only places to stay had neither air conditioning nor hot water… when there was one road into Los Islotes and only that same road back out… when we had no bathroom on the property… and when you needed a machete to make your way down to the beach… we’ve dreamt of another turning point.

We’ve dreamt of the day when we could sit back and relax in comfort savoring all that Mother Nature serves up here.

This past Saturday, as Lief and I stood around our rancho’s wooden bar with a small group of friends, cocktails in hand, Jack and Valerian off-loading surf boards and heading down to the beach, the sun strong and the waves pounding, we looked at each other and smiled.

We’re closing in on 10 years later, and Los Islotes is nowhere near where we originally imagined it would be by this point.

On the other hand, we appreciate what’s already here more than ever. I’ve seen a lot of the world’s coastline, and the stretch of Pacific at Los Islotes is about as good as it gets.

Meantime, while we’ve been pushing slowly but steadily ahead with development at Los Islotes, the nearby communities are growing up. There are many more options for where to hang your hat when your make your way out to this coast to soak up the sun or surf in the sea, but demand is still ahead of supply.

Next turning points for Los Islotes will be the construction of our first houses (we’re building five to start; three have been reserved)… and the launch of our first condos.

I look forward to these next stages of development with mixed views.
Our vision for Los Islotes has always been a community. Lief and I welcome the company out there of like-minded pioneers.

At the same time, we respect the still-today untouched natural beauty of this spot. As the world gets smaller, private, pristine outposts like this are harder to find. Our challenge now is to preserve all that nature has made here while layering over it luxury-standard comforts and amenities of our 21st century.

« Getting Around Panama: Taxis, Uber, And My Experiences
Expats In Coronado And Panama’s City Beaches »